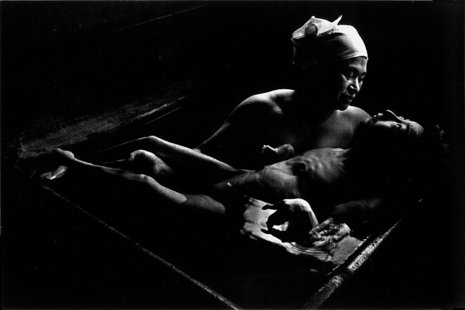 .  I was quite young. It was before I had any inkling to be a photographer. I think I was twelve, and I saw it in a Readers Digest of all places. It had quite an impact on me, and has permeated my thoughts for years. To talk about the image’s influence on me is complicated.  It didn’t make me want to rush out and become a photographer nor did it create in me a calling to photojournalism. In fact, my work has always been in a much different direction.  And because of the iconic stature of this image, I find it a little unnerving to start talking about how it influenced me especially because it isn’t really apparent in my photography.

My work recently has been going in new directions. I have been exploring nudes, and printing them in black and white. This is a whole different universe than what I have been doing over the last several years. I was looking at work by Edwin Blumenfeld that gave me the idea of using wet silk.  I also had a lot of ideas fermenting after a visit to the Rodin Museum in Paris. After taking this image and spending time looking at it,  I can’t help feel there is something here that is coming out of being affected by Eugene Smith’s image.

I believe in my path and the art history I have absorbed that has given me direction and guidance. It is a dangerous game to compare yourself regardless of what your endeavors might be. However when I look at “Tomoko Uemura in Her Bath” and where it came from and the human plight Smith captured, there is a conflicted part of me that feels somewhat frivolous. Whenever I catch myself getting cocky and thinking a bit too much of what I am doing, “Tomoko Uemura in Her Bath” always knocks me back into place.