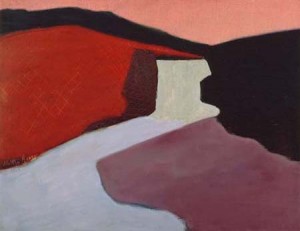 One painter I have always loved is Milton Avery. I saw this painting at the AGO around 1986. The whole show really knocked me out. I was really obsessed with colour and trying to grasp a better understanding of how to use it with my photography and the profound restrictions the medium imposes.  It took a while for the impact of what I experienced with his work to come out. 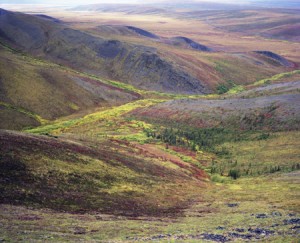 Eventually his influence started oozing out into my work without me realizing it. I had always wanted to photograph up in the Yukon, and I made two trips along the Dempster Highway to photograph. The second time was in August, which is the fall season. The tundra was completely red. It had also been raining a lot, and to anyone who has worked with colour film will understand that this is good. Soft light and the earth was soaking making the colours nice and saturated. YUMMMY!!!! I knew this spot and drove from Inuvik for a few hours, and found a small service road (if you can call it that) which was used for getting rock to maintain the highway. I drove up the road and parked at the base of mountains. It was raining and there wasn’t a good spot to put up a tent, so I slept in the truck. In the morning I grabbed my gear and trudged up to the top of the mountains to see what I could find. Actually I was seeking out a spot I had photographed a couple of years back and I actually found it!!!! At that point I was photographing everything with a 4×5 camera. I composed my shot, put in the film holder, did two exposures and sat down and took in the view. This image is a bit of a milestone for me because after I took it, I knew that if I was to grow as a photographer, I was going to have to move away from what I had been pursuing for the last several years and force myself into a new direction.

Getting back to Milton Avery, it was a few years after I had taken this picture and I had a poster of Red Rock Falls that I wanted to hang up. I like putting my work up but I frequently move the pictures around and discard some and hold on to others. It is a long editing process for me and I believe it is important to soak in what I am doing. I happened to hang the two pictures together, and when I looked at them, I realized how much I learned from that painting. It is a wonderful experience to have a painting or any form of art that has made an impact on you come through you in one of your own images. I never would have been able to make the image above if I hadn’t seen Red Rock Falls and in my own small way, I feel like a participant in that infinitely huge universe of art history.